In IO news this week: a few updates to IO dashboards and a final development push to bring our Ruby IO client library up to date with version 2 of the Adafruit IO API.

We’ve made two changes to line charts on IO dashboards in the last couple weeks, one that will be visible and one behind the scenes.

First, we’ve replaced the fixed legend in all line charts with one that follows your mouse cursor while you’re hovering over the chart. We think it’s a better way to show the value and location on the timeline of the data point or points you’re focusing on, and we also happen to like the style :D. You can see the new “hover legend” on all your dashboard charts now. 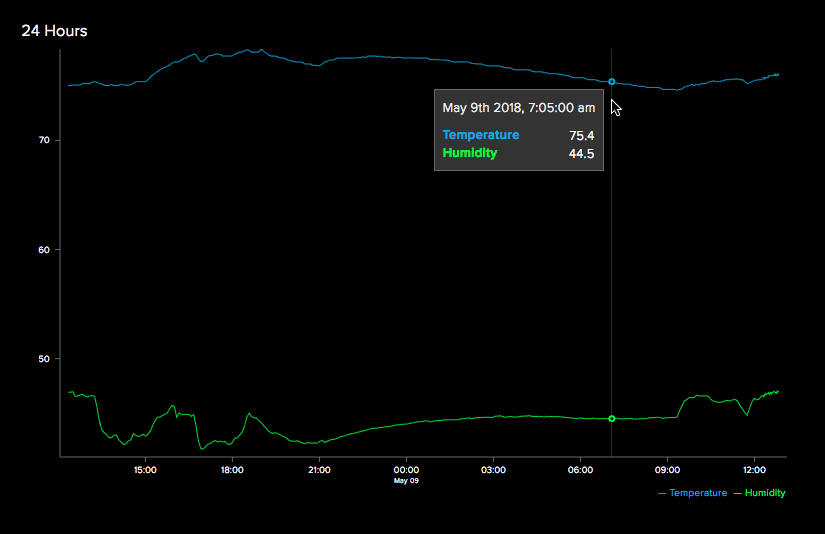 The second, less visible change involves memory usage on long-lived IO dashboards. We’ve known for a while that we have a problem with dashboards + line charts + browsers crashing after a few hours of live streaming data, and it stinks.

The cause is a memory leak and we haven’t solved it 100%, but we’ve improved the situation. We’re continuing to research performance and memory usage issues with dashboards. It’s difficult to balance user friendliness, beautiful interactive web interfaces, responsive soft-real time data rendering, and long lived pages. We’re going to keep improving and we hope you’ll keep joining us on the journey.

We’ve officially released version 2.0.0 of the Adafruit io-client-ruby library. This version has been a long time coming and is the first client library we’ve released supports all the major endpoints for version 2 of our HTTP API. The library now also includes support for MQTT connections.

We’re continuing work on our other libraries–including Arduino, Python, Javascript, and Go–and we welcome community contributions. All our client libraries are open source and available freely for use in your projects.

Get in touch with us on the Adafruit IO forums or ping @adam.io on Discord if you have any questions.